That’s one conclusion of a new study the looks at the emissions by income in all countries. Instead of focusing on the emissions of rich vs poor countries, it illuminates how the rich and ultra-rich are responsible for massive emissions.

How the World’s Richest People Are Driving Global Warming

It’s the bedrock idea underpinning global climate politics: Countries that got rich by spewing greenhouse gasses have a responsibility to cut emissions faster than those that didn’t while putting up money to help poor nations adapt.

This framework made sense at the dawn of climate diplomacy. Back in 1990, almost two-thirds of all disparities in emissions could be explained by national rankings of pollution. But after more than three decades of rising income inequality worldwide, what if gaps between nation states are no longer the best way to understand the problem?

There’s growing evidence that the inequality between rich and poor people’s emissions within countries now overwhelms the country-to-country disparities. In other words: High emitters have more in common across international boundaries, no matter where they call home.

Analysts from the World Inequality Lab, which is led by the Paris School of Economics and University of California at Berkeley recently put forward an alternative assessment focusing more on varying measures of consumer income than gross domestic product. After a generation of poorly distributed gains from globalization, it turns out that personal wealth does more than national wealth to explain the sources of emissions. Climate progress means first curbing the carbon output of the wealthier among us.

Researchers at WIL drew on a range of data, from diet to car ownership, stock market investments and global trade to estimate individual carbon output. The top 10% of polluters – about 770 million people, roughly the population of Europe – are the climate equivalent of the world’s wealthiest decile who earn more than $38,000 a year, according to Oxfam. The trend is clear: Emissions generally rise with wealth.

The richest 1%— the more than 60 million people earning $109,000 a year—are by far the fastest-growing source of emissions. They live all over the world, with about 37% in the U.S. and more than 4.5% each in Brazil and China.

The rich and poor pollute differently

As people get richer, diets tend to diversify and meat consumption rises. We’d need a second Earth if everyone had the diet of an Australian or Brit. The average American in 2019 ate 53 pounds of beef—the most carbon intensive meat—according to USDA. But families in Argentina and Uruguay—where a lot of cattle are farmed—consumed even more than that, according to an industry website. Growing middle classes in developing countries from China to South Africa are eating more meat than ever.

Far higher up the income distribution, the emissions increase exponentially. The single-most polluting asset, a superyacht, saw a 77% surge in sales last year. An 11-minute ride to space, like the one taken by Amazon founder Jeff Bezos, is responsible for more carbon per passenger than the lifetime emissions of any one of the world’s poorest billion people, according to WIL.

One-tenth of all flights departing from France in 2019 were on private aircraft. In just four hours, those individually-owned planes generate as much carbon dioxide as an average person in the European Union emits all year. Four-fifths of the people on the planet never get on an airplane in their entire lifetime, according to market analysis by Boeing.

Owning a car, meanwhile, is one of fastest ways to enlarge an individual’s carbon footprint. SUVs were the largest contributor, after power, to the increase in global carbon emissions from 2010 to 2018, according to the International Energy Agency. In the U.S. there are about 84 cars on the road for every 100 people, compared with just 24 vehicles in India. But there’s often a huge divide within countries as well. In São Paulo, more than two-thirds of men in the poorest 10% will walk or cycle to work, emitting no carbon. That car-free lifestyle holds true of only about 10% among the Brazilian city’s richest 10%, according to a 2016 study.

When it comes to energy consumption, the difference can be even more stark. An average person in Nigeria uses about half as much electricity in a year as a U.S. high-definition television.

The world has changed, and so should the discussion of emissions

The huge gap between high and low emitters suggests the current nation-­centered approach to cutting carbon needs to be rethought.

Lucas Chancel, a researcher at the Paris School of Economics who co-directs WIL, points to carbon taxes as an example. That policy has been deployed in many places as a regressive measure, meaning poorer people pay more as a proportion of their income. The further you look down the wealth distribution, the higher a percentage people pay for energy.

We should put a little more effort on the top of the distribution, who concentrate a lot of the emissions, and who have not really been the focus of policies of the past decades  — World Inequality Lab’s Lucas Chancel

As more of the global poor become able to afford sport-utility vehicles, air travel, meat and other elements of the high-carbon lifestyle, political impediments to reducing these new emissions will likely rise. “There is a window of opportunity of a few years before things can completely go crazy,” Chancel says. “If we miss this window, it will be more socially complicated, because carbon policy will not be as concentrated on a small elite anymore. It will be widespread and it will impact the entire population.”

Addressing emissions inequality within countries is just as important as reducing pollution on a national level. WIL’s research shows that, for example, to even out carbon footprints in the U.S., its top emitters would have to cut pollution by 87% by 2030 while the bottom half could actually increase theirs by 3%.

The findings get to the heart of the landmark Paris Agreement, through which nations make commitments to cut emissions based on their abilities. If the U.S. just counted the emissions of the bottom half of its earners, it would already be on track to limit global temperature rise to 1.5C, the stretch goal of the Paris accord. On a national level, though, with the inclusion of wealthy Americans, the U.S. is falling far short. The same goes for France, India and China.

Over the last two decades policy researchers have left a substantial library of strategies, options and tactics to put national greenhouse-gas pollution on a glide path to zero. The same isn’t true for wealthy individuals.

That’s started to change. A small group of researchers published a paper in Nature Energy in September that put forward five ways in which the global rich can leverage change much larger than themselves.

As consumers and investors, the choices of the wealthy can have outsize impact, especially on transport and housing. Just 1% of the world’s population is responsible for half the aviation emissions. Cars are the biggest source of per-capita emissions in the U.S. and the second biggest in Europe. Changing that, and much else, requires changing social norms. But creating demand for low-emission products such as electric vehicles and heat pumps can help subsidize a carbon-free path for others around the world to enter the middle class.

And just as companies generally decline to fully use their lobbying power, social capital and brand identities to press governments to take stronger climate action, rich people tend not to use the full extent of their influence: as role models, as corporate executives or board members, as citizens. Financing and supporting political campaigns, advocating for change within companies and lobbying governments directly all represent untapped levers for the carbon elite.

“If you’re in the top 10% you have the most power and possibility to help make those systemic changes happen,” says Kimberly Nicholas, a sustainability science professor at University of Lund and an author of the Nature Energy paper.

WIL’s data shows runaway emissions from a class of individuals—the top 0.001%—whose responsibility is so great that their decisions can have the same climate impact as nationwide policy interventions. Together, the top 10% of emitters generate more than four times as much carbon as the global average. They remain a significant source of warming even though many of those people saw a surprising decline in emissions between 1990 and 2019. That’s because the group largely consists of lower and middle classes in rich countries, who have often been left out of economic booms that have benefited their wealthier peers at home.

And while the 65% of the people who pollute the least have seen steady income gains—and consequently rising emissions—over the last three decades, they still contribute a relatively tiny share to global warming. A February study found that lifting hundreds of millions of people out of extreme poverty will only raise global emissions by less than 1%.

“Many people do not see themselves being part of either the problem or the solution but look for governments, technology and/or businesses to solve the problem,” wrote the authors of a 2020 Nature Communications journal article called “Scientists’ Warning on Affluence.” But that paper concluded people, not institutions, need to solve the problem. The organizations engaged in climate debates—governments, companies, NGOs—are ultimately legal or social structures made up by people. And if people don’t change, the institutions won’t either.

Carbon inequality math is so new, and so intimidating, that researchers assessing it are left mostly with questions. Perhaps the biggest one comes in the “Affluence” paper: “Can a transition to reduced and changed consumption be achieved while at the same time keeping economic and social stability?” As consumption and emissions continue rising, that remains very much an open question. 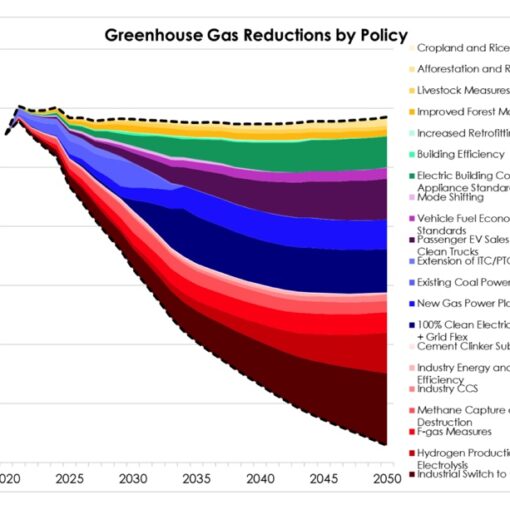 The striking thing is not the bad news, which is not really news for those who have followed the science closely. It’s […]