The Trump nightmare is over, and it’s difficult to adjust to good news coming from DC.

On Earth Day Biden announced his plan for US climate leadership. It’s a giant and overdue step in the right direction, but there’s still a huge lift ahead of us. Here are excerpts from some useful news reports on the US Climate Summit:

Jobs and Technology Take Center Stage at Friday’s Summit, With Biden Pitching Climate Action as a Boon for the Economy by Inside Climate News. “We can do this,” Biden told the world leaders attending the virtual event. But it will be a heavy lift to get the world on track in time to avoid the worst impacts of climate change.

“We have the technology,” said Sharan Burrow, the general secretary of the International Trade Union Confederation with 200 million members in 163 countries. “We have the finances to get the job done.” She added, “There are no jobs on a dead planet. We will work with anybody to build good jobs on a living planet.”

What we saw at the Summit, by Climate Hawks Vote:

We’ve listened to the experts and digested the announcements that came out of the last couple of days. So many pledges! The big United States pledge of a 50 percent reduction in emissions by 2030, compared to 2005 levels, nearly doubled former President Obama’s pledge of a 26 to 28 percent reduction by 2030, and — more importantly — it’s in line with the IPCC report telling us to reduce world emissions 45 percent by 2030. Some takeaways and further reading:

What you need to know after Biden’s climate pledge by Julian Spector of Canary Media:

The reports were true.

President Biden officially upped the U.S. climate goal Thursday to 50 percent lower emissions in 2030 than we had in 2005. That’s more in line with the science on how to avoid really catastrophic warming.

If you’re wondering what actions are required to actually meet this new and improved aspiration, Canary Media has you covered.

Jeff dug into the policies that could add up to Biden’s target, based on research from the folks at think tank Energy Innovation.

“Our modeling finds that to get the types of reductions we’re talking about, you need more than incentives,” said Robbie Orvis, EI’s director of energy policy design.

Here’s a taste of those more muscular measures:

The administration will now see what it can enact through infrastructure and jobs legislation and what else it can achieve through regulations. Let the wrangling begin. 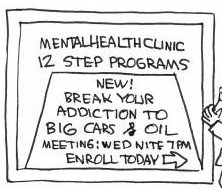