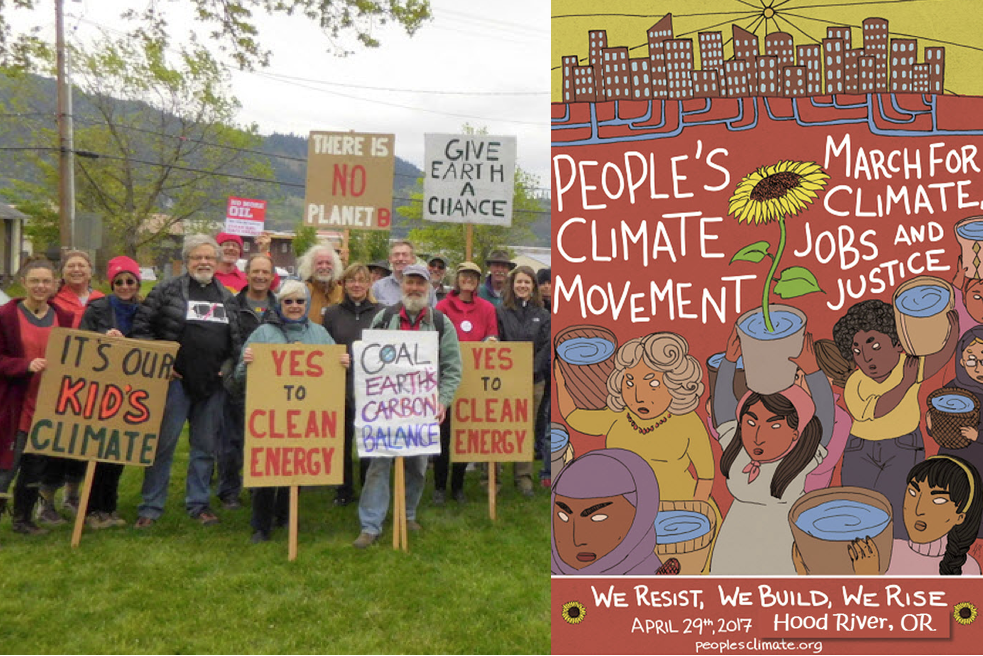 12:15 to 12:45 pm: Closing Ceremony on Hood River Library Lawn, if rainy we will relocate to the Riverside Church chapel.

Climate groups are planning climate justice and social justice marches on April 29, 2017 in Washington, D.C. and all over the country. In Hood River we expect to take the signs we painted on Friday night, convene at Waterfront Park, hear speeches, and march up to downtown Hood River.

“We believe that in this moment of division, turmoil, and fear, it’s important to put forward an alternative vision that inspires and connects,” 350.org founder Jamie Henn wrote. “If we don’t put forward our own vision—of an economy built on justice and powered by clean, renewable energy—then we let fossil-fuel-soaked nationalism, xenophobia, and hatred win. We need to show that more people still believe in our shared vision for the future than in Donald Trump’s.”

“That march made a huge impact, helping drive forward the Paris Climate Agreement and push President Obama to make climate action (including rejecting the Keystone XL pipeline) a priority during his last two years in office,” Henn continued.

“To change everything, we need everyone,” was the motto of the original march. “This spring,” Henn wrote, “we’re renewing that vision—to show that our movement is just as ready to fight Trump’s racism and hatred as we are the fossil fuel industry that’s poisoning our future.”

See all the 2017 Earth Week Actions